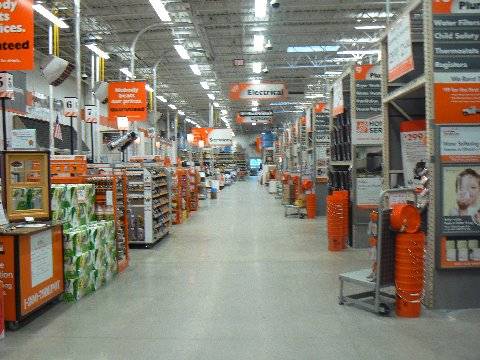 Whenever I go shopping in a retail store for a neat and consequently “must have” household necessity—like an electric can opener or a screwdriver that’s two feet-long, which—once it is mine—will make my life complete (for up to 48 hours, at which time I regret not having bought either a dog or a pound of cocaine instead since the whole point was to feel joy and fulfillment as a human being rather than to possess the ability to open square sardine cans really fast, except that I never realize that at the time, which is why keep I buying stupid stuff like screwdrivers that are two-feet long), I always spend a really long time searching for whatever it is I need before I ask a store clerk where it is. I’m probably not alone here. The excitement is in the searching and anticipation of finding your thing. And then when you spot it on a shelf there’s the angelic chorus of “Ahhhhhhhhhhhhhh” that automatically plays in your head. So nice. So worth the effort.

Of course, I don’t actually say, “Noooooooooo!!!” I just think it. And then I politely follow them around like a eunuch with a dustpan while they learn about where everything in their store is and how it works.

I recently had the following conversation with the clerk at Home Depot in the garden section. I was looking to buy a hose (yes, it’s now October but I find buying lawn and garden supplies at the end of summer rather than the beginning results in a HUGE savings as the prices on most of these products are drastically reduced. I apply the same concept to winter products which is why I refuse to buy sidewalk Ice Melt until March. Just a tip). I was having trouble deciding between two different 50-foot hoses. Well, actually I was trying to at first decide if I needed a 25-foot, a 50-foot, a 100-foot, 150-foot, or any hose at all since I hadn’t used a hose since I washed my parent’s Chevy Vega in 1972. But I eventually decided I needed one because adults are supposed to have one and I’d been putting this off far too long. I decided on a 50-foot. One hose contestant was the Gilmour Medium Duty, 400 psi, with a “limited lifetime warranty” ($13), and the other was the Miracle Grow UltraLite, 275 psi, with a seven-year warranty” ($20), that advertised on the packaging that it “Lays flat” and “Snaps Back Into Shape.” Sensing that I was either confused or loitering, a store clerk approached me. I want to make it quite clear that I am not making any of this conversation up:

Her: “Do you have any questions?”

My first question wanted to be “How much psi does it take to make something explode?” but I felt that was getting too technical for the opening and should be question number four. I then considered asking if the Miracle Grow “limited lifetime warranty” meant the hose had a limited lifetime and would be guaranteed up to the point its limited life came to an end, such as tomorrow, or if this was in some way a reference to my lifetime. I thought this question was more complicated than my first choice as this one bordered on the metaphysical, but in all fairness to me I think the Miracle Grow people forced me to consider it. I decided this would be question six.

At this point she picked up the hose and began reading the text on the wrapper.

Me: “Are you going to try to figure out what it does by reading the box, because I can do that myself. As a matter of fact I already did.”

Normally I just think this and don’t actually say it since it’s really kind of jerk thing to say to somebody. And for a moment I had to replay it in my mind and consider if I had actually said it or just thought it really loud. Then I determined I had said it. And I realized I had crossed the Rubicon that separated Pointless Civility from Productive Jackassness. I was now on the other side. I waited for a response.

Her (a little embarrassed smile): “Yes.” And she continued reading.

Me (more like an actual human): “If you don’t know what it does or what ‘snaps back into shape’ means, it’s okay. You can just tell me.”

Her (putting the hose down): “I don’t know what it means.”

But then, suddenly, as though graced with an epiphany she said—

I have no clue how she arrived at this percentage. But it would mean it weighed one-tenth of the less expensive hose, which would be impossible unless it was made out of helium. Now, as I said, I’m not making this conversation up. And I want to emphasize that as we move further into her analysis of the UltraLite hose. So just let me say, in regard to the next thing she said, that I swear on the lives of my children that it’s true. And when I say ‘on the lives of my children’ I’m referring of course to Carra’s cats (which counts). And so after she says, “It’s 90% lighter than the other hose,” upon picking up both hoses at the same time, and realizing the UltraLite actually weighs more, she adds—

“—when it’s filled with water.”

Ah ha! Because when you run water through the more expensive hose the water turns into Styrofoam. Brilliant! I’ll take one!

Home Depot is on the right side of the road, and that makes it convenient to pull in there. Menards—which is our local big hardware, home improvement, and lumber store, which apparently Home Depot is trying to drive out of business by setting up shop thirty yards away (similar to the way Hobby Lobby built their most recent store in Michael’s parking lot) is also on the right side of the road but you have to be driving in the other direction. Confounded by the hose dilemma I was going through at Home Depot, I got on the other right side of the road and pulled into Menards. One of the things Menards has that Home Depot doesn’t have is an accidental aviary. Yes, actual birds. The lumber yard for Menards is connected to the outside and is separated from the store by large automatically opening doors. The birds fly into the yard, and then the big doors open when people go from the yard to the store, and so the birds fly into the store, apparently attracted to anybody who remotely looks like Tippi Hedren. And there they perch way up high in the rafters, providing the customers with this pleasant pastoral sort of thing as they go “chirp, chirp, chirp, chirp, chirp” which is very nice, although I think in bird language it’s probably, “What the hell! What the hell! Where am I! What the hell!” But I find it soothing.

So in my quest to find the perfect hose I found myself in Menards. And there standing in an aisle was the Fairy Clerk. She was about forty years old. She wasn’t at a desk or anything, she was just standing there in the aisle rearranging bungee chords on the shelf. I watched for two minutes as random people approached her with questions:

Fairy Clerk (stopping her work and addressing the man): “Aisle three in electric. It’s off to the right when you first come in.”

Next Man: “I know this is a dumb question but do you guys sell zebra striped Duck Tape?”

Woman: “Do you know where I can buy a fire engine for my four-year old for Christmas?”

Fairy Clerk: “To ride on or push around the floor?”

Woman: “Push around the floor.”

Fairy Clerk: “Macy’s—the one on the west side, not the east side.”

This is obviously somebody who spent all her downtime not standing around idly and contemplating the Second Coming but, rather, going up one aisle and down the other asking, “What is this? What is this? What is this? What is this?” until she answered all the questions and felt herself qualified to be a professional sales person. Consequently I think there should be a Nobel prize given out for “The Person Who Most Contributed To Society By Being Really Good At Their Job.” This has exponentially greater value than that achieved by a world leader who got two other world leaders who really dislike each other to sit down and have tea for an hour before going back home to launch missiles at each other.

I may have digressed.

Anyway, I ended up buying the cheaper hose. I took it home and cut the bands. Attached to the bands were three round, black plastic disk things–though, I had no idea what they were. So I threw them away, because that’s what I do with things I don’t immediately understand. I assumed they were somehow used to tie the hose down to the ship on its way from China the same way those hooks on the bottom of cars are used. I connected the hose to the outdoor spigot, turned on the water, and it leaked all over the place at the spigot connection. As I coiled it back up I noticed there was no washer in the end that connects to the spigot. I realized all I had to do was buy a washer but I thought it was pretty chintzy that they didn’t come with washers. And I knew it didn’t come with washers because washers are rubber and maroon colored. And that will never change.

So in the process of returning the hose to Menards I learned that washers are not maroon colored anymore, but are black plastic and come in threes. But I didn’t like the way the hose kinked in the grass, and coiling it back up was on par with trying to fold an anaconda so I thought I’d get something a little more upscale. I ended up buying something called “Flexzilla” that cost three times as much (but it glows in the dark, which is very cool. If not entirely necessary). At first I couldn’t decide if I should get the 50-foot one or the 100-foot one. Then I thought, “If I need more length I could just buy a second hose later. All I need is to find some sort of connector that will join two hoses together. There must be such a thing” (unfortunately I’m not making that part up either and I’ll be discussing this further in a moment). So I looked at all the hose fittings and after a good ten minutes was unable to find any sort of bridging section for putting two hoses together. I went to the counter.

Me: “Do you have some sort of connector that will join two hoses together?”

Not The Fairy Clerk: “Everything we have is seasonal. If it’s not over there we won’t have it again until next year.”

Here I would have preferred, “I don’t know, let’s go look.”

Now, you may be reading this last bit here, about the hose connector, and be way, way ahead of me. For upon leaving the store it dawned on me that when you want to make a hose longer, what you need to attach to it is something hardware nerds refer to as “another hose.” And that’s it, because hoses have what’s referred to as a “male” part at one end and a “female” part at the other end and these two things fit together and thus allow you to make endless connections. It took a half an hour for this to occur to me. But I’m glad it did, and as I left the store I was very excited and couldn’t wait to tell the other members of the troop about this amazing discovery later that night during our routine grooming and parasite removal session.