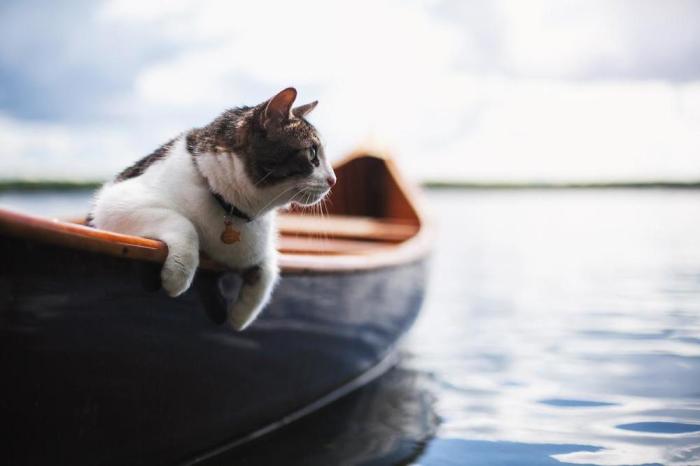 Carra and I are a two-house family, she having hers and I having mine. This is due to our disagreement over the appropriate level of grain content for whole wheat bread (she favoring “Hippie Style” and me “Early 70’s Suburban Lite”), and neither of our refrigerator bread bins being large enough to contain two different loaves. We do agree on everything else, however, including the appropriate bowling ball weight for children (forty pounds). As a consequence of having two homes, though, while I am still considered “dad” to her cats, Henry and Lionel, I’m not around them as much as most dads would normally be, though—like many dads—they’re at my place on the weekends. This weekend arrangement allows Carra at least one day of freedom to vacuum recklessly; walk through her house with an assertive, long, and unobstructed adult gait; and do general housework without Henry “helping,” which is a huge time saver, especially when it comes to linen folding.

A couple times during the year, however, like when her parents are visiting from Virginia, the kidiots—Henry and Lionel, come and live at my house for an extended period of time. Like nine days. Not that I mind. Although right around day seven I start minding a little bit. Then on day eight I usually leave an open bag of Wysong Uretic and an Oscar Mayer liverwurst on the kitchen floor and go get a motel room. But as far as the initial shift over to my place goes, the cats are fine with it, because it’s “Dad Camp.” And at Dad Camp they’re free to do things they can’t do at home, like luxuriate in dad’s Elevated, Six Holed, Four-Thousand Dollar Giant Brunswick Communal Back Scratching Pit Of Felt; —and— throw up on wall to wall carpeting; —and— eat dad’s artificial plants, which is not an activity I’d expect an animal to gravitate to but apparently I was wrong, probably because they don’t get enough edible polyester at Carra’s house. I’ll need to talk to her about this.

The main reason Lionel and Henry come to my house on these occasions is because along with Carra’s parents comes Maisie the Dog. Maisie is a very cute dog, about a foot tall, fluffy, and with a delightful personality comprised of equal parts piss and vinegar, at least as far as the cats are concerned. Maisie is inclined to bark a lot at things she doesn’t understand, such as animals of a different species and the floor. Henry, unsettled by loud and high pitched creatures that are not Renee Fleming, counters this by making it clear to Maisie that this is his house—and not hers—by marking various areas of the house with easily understood signs, and I don’t mean with a pen. Lionel, on the other hand, flees to the damp darkness of the basement and there skulks with the same brooding resentment as Erik under the Paris Opera House, unseeable, unknowable, unreachable, and with no intent of rejoining either family or society until the wolverine leaves. The human part of the family—including me—thinks Maisie’s a joy, but selling that to the Vomit Brothers has been difficult, and so they come here.

While Lionel is a good sized cat, Henry is our Extra Large. Giving Henry a firm good-morning pat on the rump is like patting a pony. Doing the same to Lionel sends him flying across the room. But what Lionel lacks in machismo and girth he makes up for in smarts and his ability to handle an acetylene torch. And while Lionel is a tad aloof (read: psychotic) Henry is very loving. Henry’s only reason for existence is to have his paws in continuous interaction with your least protected body parts, preferably your face. Why? Because he is the Love Kitty. Guests find this affection endearing at first but then after twenty minutes of him kneading their throat they suddenly remember they have to pick their toddler up from the airport or something and so depart.

Now, here I have to interject and say that I enjoy a short, though peaceful and uninterrupted brandy at the end of the day. Through the use of strict conditioning I’ve done a fairly good job at keeping Henry at bay when I’m having my brandy. In order to do this I’ve developed a system of saying “No” to him four hundred times during the course of my brandy relaxation moment, which consequently causes me to take ninety minutes to drink one ounce of brandy since a lot of time is spent saying “No” as opposed to actually drinking brandy. His approach is subtle. He lays beside me on the couch but looks elsewhere. Then he stretches a bit, but in repositioning leaves one paw on my leg. Then he stretches again, and leaves a second paw on my leg. Immediately following are woeful looks of neglect which seem to say, “Father? Please, father.” I, however, do not under any circumstance make eye contact because eye contact will be interpreted as, “Yes, son, you may attach yourself to my face, like the thing in “Alien”, because I love you.” Instead I say “No” while looking forward. It’s at this point that I’m always reminded of the old story about the camel who just wanted to put his nose in his owner’s tent because it was cold outside in the desert night. I was told this story by a teacher when I was very young. “Can I just put my nose in your tent?” the camel asks. “Well, okay,” says his owner. A few minutes later the camel says, “My neck’s cold. Can I just put my neck in too?” And the owner says, “Well, okay.” And this goes on until eventually the camel is entirely in the tent and the owner is outside because there’s no room for him. As a child I never understood the point of this story. Perhaps it was to warn me that camels were jerks. Whatever the case, I knew there were no talking camels, and I mentioned this to my teacher at the time. But that’s not the point. The point is I know Henry is familiar with this story.

Lionel occasionally gets into extremely needy mode too and has to be picked up and cuddled. He announces this neediness not with his usual quaint and delicate “ma-mow,” but with this bizarre guttural yodel that upon my first hearing it made me think Moby Dick was in the living room. Comforting Lionel during these moments is something Carra is very good at. She’s able to sweep him up and cradle him in her left arm and gently massage his head and neck with her right hand. I do not have this ability. I can pick him up, but the flip and cradling maneuver confounds me and so I just hold him the same way I would hold a baby, which is the same way I would hold a machine gun. Since both of my hands are occupied, one being fore and the other aft, I have no way to massage his head or neck, and so I just jiggle him a bit while pointing him at random objects in the room hoping the sight of one of them will provide some measure of comfort and assurance, such as a poster of Joanne Woodward in “The Stripper.”

So yesterday was the last day at Dad Camp. Lionel and Henry had a good time and—actually—so did I. They’re good boys and they’re good company. When their grandma and grandpa come again I’ll be more than happy to have them back for another week or so, unless of course either Carra or I get a refrigerator with a much larger bread bin which, of course, will radically change everything. I’m not sure what we’ll do with them then should Maisie visit. Maybe we can get them a suite at the Holiday Inn. Or a flat. And jobs.