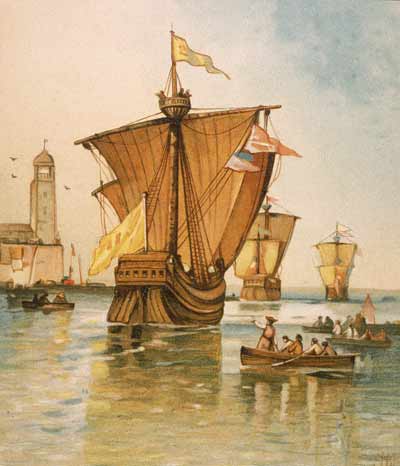 I am about to embark on the greatest journey any man has ever embarked on. What I find, only I will find. But I’ll write it all down.

October 23, 1492
I am ready to leave Palos after having loaded the ship. I have a crew of 40. The Nina and the Pinta have 26 men aboard them respectively, all fine sailors to a man and fine ships, except for mine which is kind of a stinker.

October 24
The men on the Nina have mutinied and thrown the captain overboard. He was able to make it safely to land by the grace of God and the fact that we’re still in the harbor and he only landed in about four feet of water.

October 25
The rudder of the Pinta has fallen off. I’m sure Pinzon, captain of the Pinta, is behind this. He did not want to undertake this voyage as he’s just a big baby.

October 26
Have put into Santiago to have the Pinta’s rudder repaired. The guy at the shipyard says it will take a week as he has to send for a new rudder altogether, as the old one is beyond repair. He also says the hull should be caulked or else we’ll start taking in water by the time we’re 500 miles out to sea, but I just had the hull caulked before we left Spain so I know he’s jerking my chain.

October 29
Having sailed off from Santiago three days ago we have just seen our first bit of land. The natives here are of fair complexion and speak a somewhat fluent dialect of Portuguese. They dress in Christian clothes and have developed customs not too unlike our own. I suspect that a Portuguese expedition claimed this area already and deposited its missionaries here some time ago.*

*(The longitude and latitude for this island as recorded by Columbus in his log would indicate that this island was actually Portugal). — E.d.l.C.

November 2
Have sighted a large land mass that I’m sure is China.*

*(Given the distance travelled this was probably France). — E.d.l.C.

November 8
Have travelled 600 miles in the last week. There is no sign of land.

November 10
This is sooooo boring. Not at all as I expected.

November 11
Passed a distant volcano which was in full eruption and put on quite a display. The men, ignorant of such things, were quite afraid until I calmed them down and explained to them that I had seen many such volcanoes and that there was nothing to fear from the smoking mountain that was a good twenty leagues away. I’m in the middle of nowhere with a crew of morons.

November 16
To engage the crew I have taken to starting the ship on fire and then having them put it out. They have gotten very good at this, and should a fire break out that I didn’t start I think we could handle it.

November 17
The voyage thus far has been long and tedious. Writing in my log each day has become an annoying affair and I have decided to just make stuff up.

November 18
The men are all afraid we’re going to sail off the edge of the world, but I know this to be nonsense as the edge is in the other direction.

November 20
Have sailed 117 miles today but told the crew it was only 90 so they would not feel they were so far away from home. This calmed them. The fact that his minuscule deception could actually make any difference to anyone is testament to the fact that the crew are complete boobs.

November 22
We’re hopelessly lost. We’re all going to die. This is not my fault.

November 24
No. Never mind. My fault.

November 25
Have sighted land. Will take the long boats out on an excursion to the shore. I still do not understand why the long boats are called “long” when they’re actually shorter than the regular boat.

November 26
The natives all ran away when they saw us. They seem a peaceful people and are all buck naked.

November 26, still
Have explored this island of unsurpassed fertility–which in your majesty’s and Mrs. Majesty’s honor I have named El Viagro. It has a lot of sand and trees and stuff, and all sorts of plants, but I don’t know what any of them are. Your majesty may wish to send along a botanist on any future voyage. There are no four-legged animals here except for a species of frightfully monstrous, screaming, diabolically horned wolves.*

November 26, still again
The natives here have told me of an island 20 leagues SW where the people have faces like dogs and they cut off their victim’s heads and eat them and then cut off their genitals–their victim’s, not their own. I’m sure this is all nonsense and have decided not to bother going there.

November 26, three minutes later
The natives also speak of an island due west which is inhabited entirely by seven-foot tall women who wear brassieres made of solid gold. This seems a logical possibility so Fred and I have decided to explore it for the good of your majesty and God who loves us and for the glory of Spain which God loves cuz God loves a workin’ man.

November 27
Found none of the above mentioned inhabitants on said island. Found a serpent in a lagoon and Fred killed it and we ate it. It tasted like snake.

November 27
Explored a large cave on the coast and fell down and skinned my knee.

November 27
Back on the ship we saw a mermaid riding a dolphin and playing a sackbut. She waved. We waved back. Really.

November 28
Weighed anchor at dawn. It’s about 500 pounds. Tomorrow we will weigh the Master-at-Arms.

November 28
The crew of the Pinta has mutinied and changed its name to the Pina Colada. They think this is very amusing.

November 29
The Pina Colada is taking in water. Ha ha.

November 29
The crew of the Nina has mutinied again even though there is no one on board to mutiny against. Idiots all. They have changed the name of their vessel to the Tia Maria. They think this is very amusing. They are very noisy and no one can get any sleep as they play their stereo very loud till way past midnight. During the day they sing “99 Bottles of Beer on the Wall” and when they get to the end they start all over—which is just an insane thing to do—and if God would see fit to have them eaten by a monster I could live with it.

The ship’s surgeon has died. I and the crew are all deeply concerned as we now have no one to make fun of.

December 2
The daylight is getting shorter, and the nights longer.*

December 8
The front end of the Pina Colada fell off. I have no idea how it happened but I’m sure it’s not my fault.

December 10
I just know in the future people are going to say wonderful things about me. And then they’ll start saying really bad things. And then, after a while, they’ll say really nice things again…and then bad things…and then nice things. And it will never end. It will just go on and on and on and on and despite all of my dreams and goals, I’ll become just an icon for political agendas. I have no idea what I just said. I’m really sauced. The natives make this beer out of clam mucus and they gave us some for half a carton of damp Pall Malls. Whoa.

December Something
Sailed SSW for 6 miles and ENE for a league then NSW for a good hour until changing to SE till dawn. I’m so hung over.

December 12
Assisted in the repairs of the Pina Colada. I got a splinter.

December 16
Have taken the “long” boats and set foot upon which I assume is Jamaica, and in the name of your majesty have renamed it Tapioca.

December 17
The natives all ran away from us. They have the initiative of a door mat. They are all buck naked except for tennis shoes that they wear on their ears. They are an incredibly docile people and I’m sure if your majesty was to send just one Catholic nun armed only with a crossbow in here she could have the whole group whipped into shape in a day and make damned fine Christians of them.

They have a habit of smoking cannabis. They have no industry: they don’t farm or hunt as I can tell. As mentioned they don’t wear clothes. They don’t fight amongst themselves, nor do they involve themselves in prolonged conversations. As far as I can tell they don’t do anything except sit on the beach and point at random objects and giggle.

Their primary food source is something they make themselves–which is the only thing they seem to do–and is a small round object of what I believe is some sort of vegetable matter soaked in animal fat. They consume a great many of these at one sitting though in a leisurely manner. They call them quakeekees.*

Though communication with these people is difficult, we usually make ourselves understood through signs and with the help of natives from previous islands who have “volunteered” to come with us on our further exploration. The natives here have told me that on the large island of Bohio there is either a lot of cannabis or a lot of cannibals, and I’m not sure which one they mean, but they have suggested I go there nonetheless. The native interpreters we have with us haven’t been much help in this matter. When asked to clarify they are inclined to shrug their shoulders and snicker.

December 18
The island has many fine cafes that allow you a bit of peace out of the rain.*

*(It’s uncertain here if Columbus meant caves or if he was waxing poetic, or if he was drunk and referring to somewhere else). — E.d.l.C.

December 20
Met King Quaheekanalee, who seems to be in charge of this place. He treated me to a fine banquet made up of yams, baked yams, and yams with holes in them. He was a fascinating fellow and I think the thing about him that struck me most was the fact that he was buck naked. You gotta’ love these people.

December 21
Sailed WSW for four hours until realizing the wind was blowing ESE and we hadn’t actually moved and were still in the harbor. I immediately ordered the ship to come about and pick up the eastern wind. Made good time for two minutes until we ran aground on the beach.

December 24
Have landed on another island. The natives here are quite advanced. They have spears with sharpened bone tips and they put feathers in their hair. The women all have conch shells covering their private parts. All the men have a good understanding of calculus. They have no religion but are heavily into cubism.

December 25
The men are getting sick. The boatswain has cholera. Most of the stevedores have influenza. All of the knaves have scurvy.

December 27
I am ready to sail for home. But before I leave, King Quahee-whatever says he must meet with me when the sun is low. I don’t know what time this is supposed to be since it’s low in the morning and in the evening so I’ll assume it’s whatever time I get up.