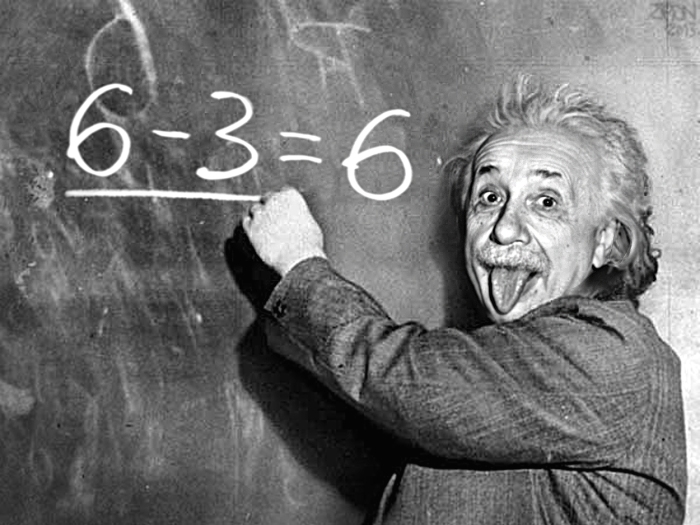 Einstein’s Theory of Gravitational Pull says that if an object is falling, and you’re inside it, you will also be falling, and at the same rate of speed. I learned this in a book called Seven Brief Lessons On Physics by Carlo Rovelli. It was the only thing in the book I understood. Despite that, it’s going on my list of all-time favorite books given that it was only 81-pages long. Length is how I measure the quality of all books. Consequently Ulysses and Harry Potter and the Chamber Pot of Doom, or whatever it’s called, are terrible. So don’t read them. But it is why Kurt Vonnegut has always been my favorite author: His books are short, the typeface large, and sometimes there are drawings—and sometimes a single drawing is designated as one entire chapter. You can’t beat that in terms of wanting to have a sense of accomplishment, especially if your goal for accomplishment is to read one chapter of a book a day.

But getting back to Einstein, outside of his lucid explanation of how gravity works, I don’t understand anything else he ever said. Or did. Which makes me wonder what he did when he was at the office. I can’t help assuming there must have been at least one occasion when his employer said, “Hey, Einstein, while you’re preoccupied with your thoughts do you think you could grab a broom and clean up a little?” I believe what he did was write formulas, publish them, and then giggle about it. Let’s take his most famous formula of E = mc2. This means energy equals mass multiplied by the speed of light squared. None of those things go together. For example, even if you were able to square the speed of light, how do you multiply that by, say, a hide-a-bed? A hide-a-bed would be an example of mass. This is a completely useless formula. It has no practical value. To evidence this, I’ll ask when was the last time you had this conversation with your wife, where she knocked on the bathroom door while you were in the shower:

Her: Honey! I’m making energy! Is the speed of light squared or cubed!? I don’t remember!

You: Uhhhh! I think it’s squared!

But since no normal person could make any sense out of Einstein’s formula, they assumed he was the smartest person in the world. Years later this reputation as smartest person ever was cemented when he followed up his famous E = mc2 with the equally astonishing K = 11. These two pronouncements made him the first and only celebrity physicist, and he quickly became the darling of the jet set and was invited to all sorts of Hollywood parties (there is of course the well-known anecdote from this time where Einstein met Marilyn Monroe at one of these parties and she said, “Dr. Einstein, with my looks and your brain, can you imagine what wonderful children we would have?” to which Einstein famously responded, “You’re a terrible actress, you know that?” (rimshot! Classic.)

Another thing that annoys me is when these people—physicists—start talking about the universe. They say there are a billion trillion galaxies and each galaxy contains a billion trillion stars, and the light from the nearest one to us took four years to get here. I say this to physicists: Stop making stuff up. I saw this woman physicist on television once (I sense that some people may find the term “woman physicist” offensive, and if so then I apologize. I’m trying to be inclusive and not patronizing as I don’t know any women physicists and so wanted only to give this woman her due. Perhaps that’s still not okay. Again, I apologize. Just noting what I was watching. My intent was to include and not patronize). So anyway, I saw this dress-wearing, rather effeminate physicist on television once and her thing was to prove that motion makes things curve. The point being that the spinning Earth makes things curve. So she stands on a playground carousel holding a basketball, and the cameraman is on the opposite side, and another crew person pushes the carousel into a circular motion, and the physicist throws the basketball to the cameraman, and—voila!—the ball curves to the left!

Well, duh! The camera is moving away from the ball! This is why it looks like the trajectory of the ball is curved! The ball is going straight! It’s the position of the camera guy that’s curving! Duh! Again. Did you get your physics degree from Bob Collins University or what?

So as shameful as that was, there is nonetheless this “fact” that not only do basketball passes bend but so does light. Yes, light. Imagine. This I also “learned” from the book. Of course, I know it’s not true. You can prove it’s not true too. Take a laser pointer and point it at some random point on your carpet. Now quickly flick the beam to another location, then quickly flick the beam back to the original location. What you’ll actually discover is that your cat thinks this is just great. This is really good for at least twenty minutes of fun and exercise for both you and your cat. But you’ll notice the light never bends no matter how much wrist torque or quickness you apply. So there you are: Scientists are liars.

All of this is quite disappointing. For a long time I’d considered myself to be a strong believer in science. This is because I eventually had problems with the other great mystery of life—God. I was raised with God. Then at about fourteen years of age I said, “Wait a minute—we used to talk to animals? People rose from the dead? Women got pregnant without having sex? All of the species of animals in the world were within a one-mile radius of Noah’s house? Somebody lived inside a whale? Shrubbery talked? Jesus fed five thousand people with five loaves of bread and two fish and nobody there said, “What am I going to do with a raw fish and also why are there no Port-O-Sans here?” And so I gravitated to science. But I must say, upon thorough examination, as much trouble as I have accepting the concept of an intelligent being looking out for us and having created the universe, I’m equally flummoxed by the scientific idea that once upon a time there was absolutely nothing, and then it exploded. How is that possible? How does nothing explode? Was the nothing made in China? What?

OK. Maybe I’m just dense. Maybe the physicists and scientists and theologians aren’t lying. Maybe I’m just incapable of faith or understanding. I do not understand the concept of the universe and I do not understand the concept of God. Sadly these are things beyond my reach, beyond my grasp. However, in my defense, I will say that I get all the jokes on the TV show The Big Bang Theory, and it makes me laugh. Also, whenever I hear “O’ Come, O’ Come, Emanuel” on the radio around Christmas time I get a feeling of calm peace. So, in regard to being able to embrace either of the two greatest realities of life, I’m considering this close enough. I’m good.