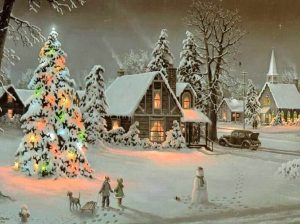 If you poll a large enough group of people to establish an acceptable sample (1,000 people) you’ll find a great many of them, perhaps even most, dislike something about Christmas. And the majority here will say they hate how it’s become commercialized. I, however, take issue with this concept that Christmas has somehow been commercialized based on the fact that it was commercialized from day one, which would actually be about day 240, 4 BC since Jesus wasn’t born on December 25th in the year zero. Somebody else was born on December 25th but I forget their name and I don’t feel like trying to Google it and figure out who it was. But their mother was also a virgin, as in before and after, but about eight hundred years previous. This according to legend. Somebody else’s legend. But I digress.

Contrary to a great many, I fully support the commercialization of Christmas because that’s the way the three kings intended it (Gaspar, Balthazar, and D’Artagnan). By bringing baby Jesus presents of gold, frankincense, and myrrh they established the now long-held tradition of buying completely thoughtless gifts solely for the purpose of making a good show. Really, what’s a baby going to do with gold, frankincense, and/or myrrh? A stick I would understand. Maybe a really nice stick. The Bible tells us that baby Jesus had to be warmed by the breath of the barnyard animals because Joseph was so poor. I think a blanket might have been a good investment on the part of any one of the Magi had they given the matter just a smidgen of thought. God knows they had sufficient time to think about it since traveling by camel from one country to another country took about six years.

Speaking of Joseph, incidentally, I can only assume he was so poor given that he was—according to the Bible—a carpenter. This is not a good occupation for someone who lives in a desert country where there are no trees and consequently no wood. No doubt if he were alive today Joseph would move to Pennsylvania to start an Amish ambulance service.

And now for the bridge:

When we finally kiss goodnight
How I hate going out in the storm.

And STOP. Is this guy the village idiot or what? “Let it snow, nobody has to leave, except maybe me, but I don’t think that has any direct effect on me at the moment and I’m too stupid to evaluate the future, like an hour from now.”

Assuming, however, this is not the village idiot, perhaps the song is being sung by a reasonably intelligent person full of the spirit of the Christmas season. Well, good for him—full of gaiety and bonhomie and let the elements be damned because we’re all happy and hunkered down here and the wonderful thing is that nobody has to be stressed out about the weather. That said, what frightfully awkward conversation had to have occurred somewhere between the verses and the bridge?

Her: You know you’re not staying over, right?

Her: Well, I was confused by the way you were carrying on about how terrible the weather was but it didn’t matter because nobody had to leave. I just wanted to make sure we’re on the same page, you know?

Her. OK…you can go ahead and finish.

Him: When we finally kiss goodnight—

Him: It’s a figure of speech.

Him: When we finally kiss goodnight, how I’ll hate going out in the storm. But if you really hold me tight, all the way home I’ll be warm!

Her: I am not going with you in your car to your house. I am staying here—in my house.

Him: Oh, I know. I meant if you really hold me tight while I’m here now I’ll be warm on the way home.

Her: You want me to hold you now so you’ll be warm later—how the hell does that work? What are you, some sort of weird half human half iguana half thermos bottle mutant freak? I think maybe you should go now.

Him: But I brought some corn for popping.

Her: Is it Orville Redenbacher’s?

Her: Movie theater butter or regular?

Merry Christmas to all! U. Allen Plum will not be posting for a while as I’ll be busy working on my expose of the scented fabric softener industry. I want to thank everyone who has been supportive of my two cents these several months. And to everyone, happy holidays and have a good New Year!!